Working with input from Steve Stainthorpe and the research done for the Tactical Communications Wing Historical Training Facility, the following article is the fourth in the series which looks to discuss the history and development of RAF Communications.

While the focus of the Royal Air Force in WWII was winning the war in Europe, the task of the RAF in the Far East was to support the armies fighting the Japanese.

At the start of the war in the Far East, the British Army was often poorly equipped and frequently outmanoeuvred by the Japanese. As a result, the RAF faced disastrous defeats in Malaya and Singapore, forcing its retreat to the Burma-India border.

To address such failings, it became clear to General Slim, the British 14th Army Commander, that air supply could redress the balance in his favour. Slim used air supply with more imagination than perhaps any other British general at the time, both to stabilise his frontline and to launch the attack that would ultimately re-conquer Burma.

One of the leading protagonists of this form of warfare was Major-General Orde Wingate DSO.

Wingate trained this force as long-range penetration units that were to be supplied by stores parachuted or dropped from transport aircraft and were to use close air support as a substitute for heavy artillery. They would penetrate the jungle on foot, essentially relying on surprise through mobility to target enemy lines of communication (a tactic that the Japanese had previously used in 1942 to great effect against British forces in Singapore and Burma). 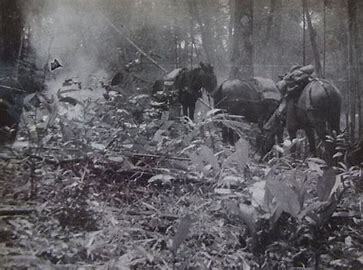 During the East African Campaign of 1940–41, Wingate under General Archibald Wavell (Commander-in-Chief of the Middle East Command) had begun to explore guerrilla tactics, when he created and commanded a unit known as Gideon Force, composed of regular troops from Sudan and Ethiopia, as well as Ethiopian partisans. The Gideon Force disrupted Italian supply lines and collected intelligence.

In 1942, after the disbandment of Gideon Force, Wavell who had since been appointed Commander-in-Chief of the India Command requested the services of Wingate in Burma. It was intended that he would raise irregular forces to operate behind the Japanese lines, in a manner like Gideon Force.

Wingate arrived in Burma in March 1942 and for two months as Japanese forces advanced rapidly, he toured the country developing his theories of long-range penetration.

The name Chindits is a corrupted form of the Burmese mythical beast Chinthé or Chinthay, statues of which guarded Buddhist temples. Their operations featured prolonged marches through extremely difficult terrain, undertaken by underfed troops often weakened by diseases such as malaria or dysentery.

Wingate took the unusual but very sensible decision to take Royal Air Force personnel with him to coordinate the air drops. ‘Who better to talk to a pilot in the air than a pilot on the ground?’

In April 1942, a message was transmitted across the military network that read:

“Volunteers are required for a special mission — officers who have knowledge of Japanese aircraft and wireless operators who have a thorough knowledge of ground-to-air communication.”

Once identified and trained, RAF signallers were attached to the Headquarters and each of the formation columns. Their main job was to coordinate the requirements of the column and teams consisted of an RAF officer and two NCOs. These teams would recce areas for suitable air supply drops, co-ordinate the requirements of all columns, and pass the information to the Brigade HeadQuarters via the RAF wireless set. They would then mark the identified strip, light flare paths and supervise the drop from the ground. 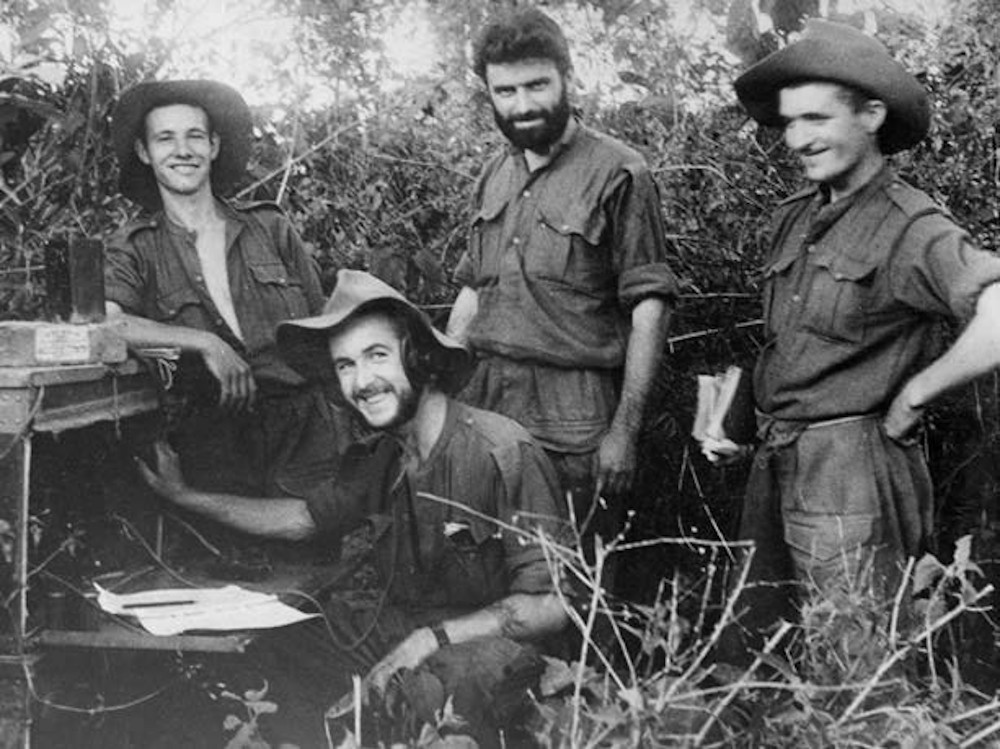 The wireless equipment used was the best available at that time:

Each piece of equipment was normally found in aircraft, specifically the Avro Lancaster. They also had access to the SCR-694/BC1306, 18 and 19 radio sets. Although adapted to be as portable as possible, the units still formed quite a cumbersome load and were therefore carried in two leather panniers, one on each side of a mule’s back. Learning how to look after and cope with these obstinate animals became part of their daily life, and often frustration. Together with these mules, the RAF signallers marched many miles during WWII. 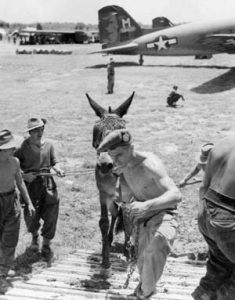 An example of the work undertaken and coordinated by the RAF in Burma was Operation Thursday on the second Chindit expedition in March 1944. Operation Thursday was the code name given to the airborne invasion phase of the campaign.

The aim was to fly a force of 10,000 men, 1,000 mules’ equipment and supplies into clearings in the heart of Burma behind enemy lines.

Three sites were selected for the initial landing grounds and were given the code names Piccadilly, Broadway and Chowringhee named after famous roads in London, New York, and Calcutta. These landing sites had been chosen in inaccessible areas to avoid contact with Japanese ground troops and all sorties were to be flown at night to avoid Japanese aircraft.

The plan was for the first wave of gilders to land troops to secure the site. A second wave would land more troops and American engineers with their equipment to construct an airstrip so that C47 Dakotas could bring in the remaining troops and equipment.

Flights were flown from three airfields:
1) Hailekandi
2) Lalaghat in Assam
3) Tulihal in the Imphal plain

All glider operations would be mounted from Lalaghat. The distance from Lalaghat to the destination was 270 miles and 180 miles from Tulihal.

Operation Thursday commenced on March 5th, 1944. Prior to and during the fly-in, the Japanese air force had been much weakened by raids on their airfields by 1st Air Commando USAAF and the RAF. In the first two days, 78 Japanese aircraft were destroyed and many more were damaged.

This allowed the operation to proceed with little interference from the Japanese air force. Wingate now had 3 brigades in Burma and all enemy attacks had been repulsed. Operation Thursday was successfully over, and Churchill sent Wingate a telegram congratulating him and the Chindits on the outstanding success of Operation Thursday.

This was the largest Allied airborne operation ever conducted until the forces under Eisenhower landed in France. It was one of Wingate’s finest triumphs, but tragedy followed a few days later when the plane carrying Wingate crashed.
Air Marshal Baldwin, the commander of the Tactical Air Force of SE Asia Command, who witnessed the operation said:
“Nobody has seen a transport operation until he has stood at Broadway under the light of a Burma moon and watched Dakotas coming in and taking off in opposite directions on a single strip at the rate of one take-off or landing every 3 minutes.”

Rather fittingly and to emphasise the experience of the RAF Signals teams and its impact on the individual the words of Sergeant Arthur Wilshaw, shown with his radio equipment as part of a Chindit Column in Burma clearly articulate his Chindit experience:

“I went into Burma just over nine stones in weight and came out a mere five and a half stones. After a month in hospital, the adventure was over for me”